This blog post takes a look at Connections and references made to the Batman TV series in The Lego Batman Movie and 2 bonuses at the end of the post in the form of a trailer exclusive reference, and a reference from The Lego Movie 2: The Second Part.

This time I have grouped similar and/or repeated references together to allow for smoother writing and easier reading.

I will only be focusing on Batman TV Series related references and connections, and if a reference could be attributed to an earlier interpretation of Batman, or the Batman mythos in general then I will not focus upon it here.

References and Connections in The Lego Batman Movie

As the Joker finishes off listing villains to intimidate the pilot we cut to Police HQ where it appears that Commissioner Gordon’s police chief is a Chief O’Hara, like the series, although, unlike the series, this version is female. It is worth noting that in Batman 66 Meets Wonder Woman 77 Issue 5 we are introduced to a female Chief O’Hara, in this instance the daughter of the original. 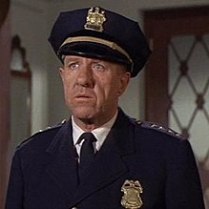 With all the “Z-Grade villains” escaped, the commissioner decides to do the only thing he ever does, and flip the bat signal, but it has been egged by Egghead, a character who originated in Batman: Season 2 Episode 13: An Egg Grows in Gotham, portrayed by Vincent Price.

All of the above characters appear again at different points throughout the movie, but only Chief O’Hara has any lines beyond giggles and confused noises.

After Batman reveals himself to the Joker and the other villains, after having disguised himself as the Mayor, he proceeds to sing a song “about how I’m gonna kick all your butts”, this song is called “Who’s the (Bat) Man” by Patrick Stump, and is included on the Lego Batman Movie soundtrack, much of the song uses the Neal Hefti Batman Theme as its structural basis, with its screams of the word “Batman” and Na Na Na Na Na Na Na Na” between verses.

After a parade of people celebrate Batman successfully diffusing The Joker’s bomb, Batman drives away in the Speedwagon (a model of Batmobile), and honks the horn, the horn being a car horn version the Batman TV series theme. This horn is repeated after he visits an orphanage where he gives out Bat-merch to the orphans.

With Alfred telling him he has to go to Jim Gordon’s retirement party Batman says no repeatedly as he ascends the stairs, eventually saying no to the tune of the Batman theme before breaking into beatboxing.

With Batman and Robin locked in Arkham Asylum, to help calm Robin down, Batman suggests beatboxing, and as before elements of his beatboxing follows the tune of the TV series. 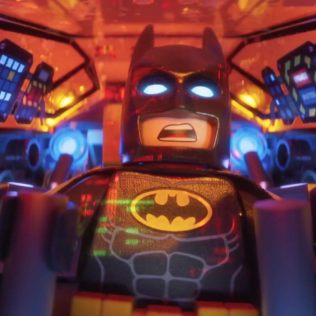 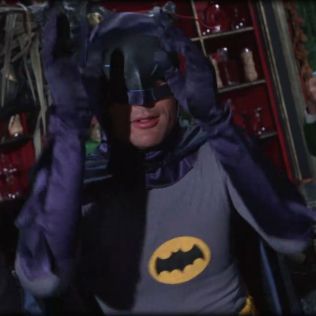 On a side note, as of this writing, 17th June 2020, this is the only inclusion of footage from the Batman TV series available on a 3D Blu-Ray release.

In taking over from her Father, Barbara Gordon puts forward her new plans for cleaning up Gotham city, in this presentation of hers we see Lego version of some seminal Batman moments throughout Batman history, including Batman running with the bomb to try and dispose of it as he does in the movie.

“Batman and Robin are fully deputized agents of the law” – Commissioner Gordon, Batman: The Movie.

Upon discovering the Batcave and being introduced to Batman, Dick Grayson is amazed by all the Bat-paraphenalia he sees with Batman warning him to keep his hands off, until he confusedly lands upon a can of shark repellent, which Batman claims is completely useless. The shark repellent gets used on the shark from Jaws later in the movie by Robin, and Batman is amazed that it wasn’t useless! Adam West’s Batman first uses shark repellent in the movie to get a shark off his leg, he would later use it in Season 3 Episode 10: Surf’s Up! Joker’s Under! when a shark appears during a surfing competition with the Joker. 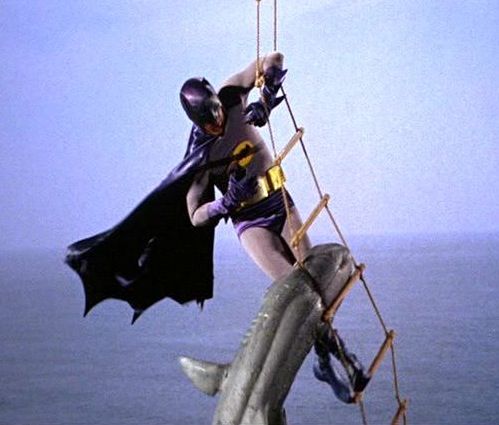 Alfred reveals a batpole for Dick Grayson to slide down so he can discover the Batcave. The batpoles used in multiple episodes, were introduced in the Batman TV series. Lorenzo Semple Jr was inspired by Hugh Hefner’s Playboy Mansion to use the Batpoles as mentioned/remembered by Adam West himself in the Batman TV series box set special feature, “Bats of the Round Table”.

As Batman and Robin prepare to head off to Superman’s Fortress of Solitude Batman exclaims “To the Batmobile”, again the Speedwagon version, and then an interpretation of the opening sound and spinning image from the Batman TV series opening credits appears. As Batman’s computer selects the speedwagon, the computer does the check from the Batman TV series “Atomic Batteries to Power, Turbines to speed”. This check is repeated later on in the film when Robin, takes the Speedwagon in his own attempt to save the city whilst Batman is trapped in the Phantom Zone. The spinning image appears again in the dance sequence in the end credits.

When Batman and Robin are released from Arkham Asylum so that they can defeat the Joker and his evil army of villains from the Phantom Zone, Alfred changes into a modified version of the Adam West Batman costume with a white moustache drawn on the cowl, rationalising “I miss the ’60s”. Despite losing the cowl fairly quickly Alfred wears the costume for quite a few scenes. Though the costume itself is a reference, it is also worth noting that Alfred (as portrayed by Alan Napier) would don the costume on more than one occasion in the TV series itself. 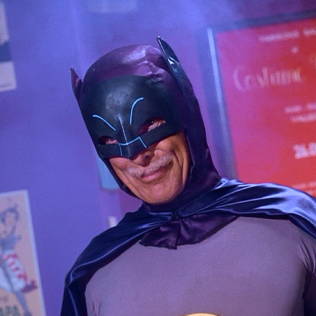 As Batman and Robin become surrounded by various villains, from various films and TV shows, that the Joker has released from the Phantom Zone, Batman instructs Robin that “together, we’re gonna punch these guys so hard, words describing the impact are gonna spontaneously materialise out of thin air”. This then happens, along with a few appropriate sound effects replicating fight scenes from the Batman TV series. 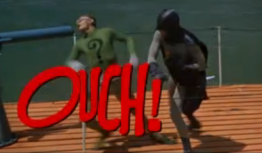 Near the end of the film, Batman places a photo of himself, Robin, Alfred and Barbara on the wall in Wayne Manor and Dick Grayson says, “Holy family photo, Batman. I love it” referencing the many times Burt Ward’s Robin would say “Holy” something or other, dependant on what was called for in the given situation in various episodes of the Batman TV series.

Though a small role, one cast member does have his own Batman TV series connection. Ralph Garman, a friend and collaborator with Adam West on various occasions. Ralph Garman portrays Reporter #2.

Ralph appeared in competition with Adam West in 2006 on “Adam West: Living in TV Land”, where, if Ralph won, Adam would put the cowl on again!

Adam West looks around Ralph’s Batman collection in the special feature “Holy Memorabilia Batman” from the Batman TV series box set, where Adam puts the cowl on one more time! 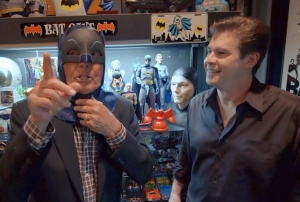 Ralph’s Batman collection was also the subject of a recent episode of “Collector’s Call”.

Ralph’s support of and connection to Adam West is vast beyond these Batman specific mentions, including but by no means limited to being a major part of helping to get Adam West his star on the Hollywood Walk of Fame, as evidenced by the documentary, “Starring Adam West”. 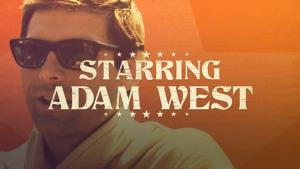 An alternate “weird one in 1966” reference; this time only showing the Season 1 Episode 26: Pharaoh’s In A Rut footage, and not the footage from the series premiere.

In response to Alfred asking Batman if he wants to discuss how he is feeling he responds no, and then starts to repeat the word no to the tune of the Batman TV theme before breaking into beatboxing in a different cut to that in the film.

The trailer ends with a short clip of the song, “We Ridin’ (Batman)” by V.I.C. Featuring Hurricane Chris (from V.I.C.’s album, “Beast”) which uses the tune of the Neal Hefti theme at various points throughout the song. A clip from the song are also included in the special feature “Team Cutdown”.

The Lego Movie 2: The Second Part

In the Lego Movie 2: The Second Part, Batman tries to convince Queen Watevra Wa’Nabi to go out on a date with him. Throughout the song, “Gotham City Guys”, Watevra explains why she isn’t in to Gotham City Guys and Batman tries to counter her points and convince her. In this song references are made to various live action Batman actors. At one point Watevra sings, “I’m just not in to guys who don’t wear tights”, to which Batman responds, “I used to wear tights, ask Adam West”, and then a Lego version of Adam West’s Batman appears.

The Lego Movie 2: The Second Part

One thought on “The Lego Batman Movie: Batman 66 Connection”