So, today is Earth Day, what better time to look at the Alien presence, whether confirmed, possible, hoaxes or theorised in the continuity of Batman 66?!

In the two-part finale, a disgruntled scientist and his team pose as aliens to get their hands on nuclear weapons. Of note, one of the so-called aliens named Vama is portrayed by actress Linda Gaye Scott who also portrayed one of The Riddler’s molls, known as Moth.

The Joker’s henchmen Verdigris poses as a Martian to instil fear in the citizens of Gotham City. The little Green Man successfully frightens Barbara Gordon at the library! Verdigris is portrayed by Richard Bakalyan who portrayed various henchmen roles to different costumed villains. In addition to The Joker in this episode, he also portrayed henchmen to The Riddler, King Tut and Louie the Lilac across earlier episodes. 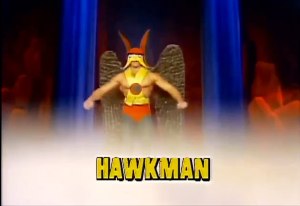 In Legends of the Superheroes it is highly possible but not confirmed that there is an alien on both the heroes’ team, Hawkman, and the villains’ team, Sinestro.

In many, but not all, interpretations of Hawkman he is a Thanagarian, and there is nothing in the story to disparage that he is. He does seem to have a human Mother, but this could be an adoptive Mother, much like with Superman being adopted as an infant by Jonathan and Martha Kent.

In every interpretation of Sinestro he is portrayed as being Korugarian. Whilst this interpretation does seem to look more human than others, Sinestro’s skin colour and facial structure has been somewhat inconsistent in the comics, and so him looking human isn’t beyond the realm of possibility.

In the final issue of the main run of Batman 66 we get a very brief appearance from Clark Kent (previously written about in my Superman connections post). So given that we see the George Reeve’s version of Clark Kent it stands to reason that he is or has been Superman. Superman getting his powers from our sun given that it is different to the sun of his planet Krypton, where he was known as Kal-El.

On the team The Legion of Superheroes there is

Saturn Girl from Titan, the moon of Saturn

On a unique page of the comic the narrative unfolds in the form of a game, and on/in this game we see an unnamed green Martian (presumably the Martian Manhunter J’Onn J’Onnz) and Mr. Mxyzptlk, a magical imp from the 5th Dimension. 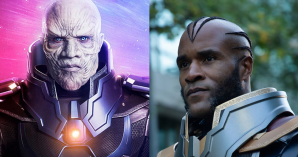 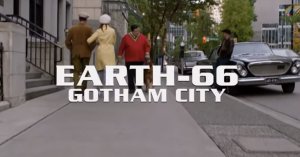 Given that the existence of an Anti-Matter Universe is made clear in the 5 part crossover Crisis on Infinite Earths, this could add new significance to a moment in Batman: The Movie.

Robin: The pirates-they’re gone! Popped like balloons! How’d it happen?
Batman: Whoever dehydrated those pirates could not have foreseen their accidental rehydration with the heavy water we use in recharging the atomic pile!
Which naturally left them in a highly unstable condition!
You saw it yourself, Robin.
The slightest impact was sufficient to instantly reduce them to antimatter.
Robin: Antimatter? You mean they… won’t be coming back?
Batman: No, Robin. Not in this universe.

Batman himself even says, not in this universe, now I’m not insinuating that all the way in 1966 they pre-empted moments from the 2019/2020 crossover but it is quite interesting. Given that the creation of the Anti-Matter Universe was accidentally brought about by Mar Novu at the dawn of time, it is entirely feasible that the 5 pirates “popped like baloons!” appeared in the Anti-Matter Universe in 1966!

With the twice postponed Catwoman 80th Anniversary 100 Page Super Spectacular (now scheduled for 3rd June 2020), featuring a story called “Catwoman of Earth” of which we have already seen a preview…It would appear the Aliens aren’t done with Earth 66 yet…