In this blog I will be looking at the Narrators in the Batman 66 continuity.

William Dozier, Executive Producer and Series creator was also the narrator for the series. Initially in piecing together a sizzle reel for the network, 6 or 7 people had been auditioned to be the series narrator, but none could quite match up to what William Dozier wanted, and so Charles FitzSimons (Producer’s Assistant), suggested that William Dozier do it himself, and the rest is history. In the CD release of “Batman: Original TV Soundtrack”, William Dozier is credited as Desmond Doomsday a pseudonym he had selected early on. On a side note; William Dozier also lent his voice to the Maitre D in Season 1 Episode 1: Hi Diddle Riddle, lent his likeness to a mugshot of a criminal in Season 1 Episode 33: Fine Finny Fiends and appeared as an unnamed TV producer in the final episode, Season 3 Episode 26: Minerva, Mayhem and Millionaires.

Legends of the Superheroes 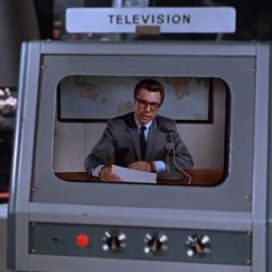 These two TV Specials are narrated by Gary Owens. Gary Owens known for his distinctive voice had a history with Batman and its sister series Green Hornet. Gary Owens had previously appeared in narrator type roles (Radio Announcer, TV announcer, Newscaster, Commentator) across the following episodes of Batman;
Season 1 Episode 18: Holy Rat Race
Season 3 Episode 4: The Sport of Penguins
Season 3 Episode 5: A Horse of Another Color

and the following episodes of Green Hornet;
Episode 3: Programmed for Death
Episode 4: Crime Wave
Episode 8: Beautiful Dreamer Part 2
Episode 10: The Preying Mantis
Episode 12: Deadline for Death
Episode 13: The Secret of the Sally Bell
Episode 15: May the Best Man Lose
Episode 16: The Hornet and the Firefly. 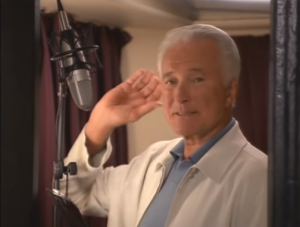 Return to the Batcave: The Misadventures of Adam and Burt
In this half biopic/half fictional story recounting the lives of Adam West and Burt Ward, mostly around the time of the Batman TV series we get narration that initially Adam West can hear but eventually Burt can hear too. At the end we find out the narration has been provided by Lyle Waggoner, the man who was the other choice for the network to play Batman, who recently passed on 17th March 2020.

Batman: Return of the Caped Crusaders
Whilst this straight-to-DVD (save for a one day cinema release), animated film doesn’t have a narrator as such, Jeff Bergman, the voice of the Joker in the film, also voices the announcer for the variety show Gotham Palace, a take off on the popular 1960s variety show Hollywood Palace which I have mentioned before in my Milton Berle blog post, as it has it’s own connection to Batman history! You can read my thoughts on this animated feature here. 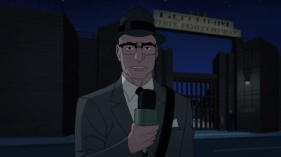 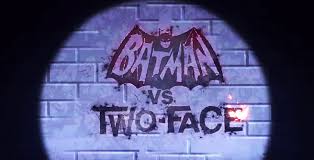 Batman vs Two-Face
In this straight-to-DVD follow up to Batman: Return of the Caped Crusaders, Jeff Bergman appears again as a reporter/announcer of sorts, introducing us to the narrative of the film. As a nice nod to the original, Jeff Bergman’s character is called Desmond Dumas.

Supergirl: Season 5 Episode 9: Crisis on Infinite Earths Part 1
At the beginning of the Crisis on Infinite Earths crossover Mar Novu/The Monitor (portrayed by LaMonica Garrett) sets up, with narration, the crisis of the Anti-Matter wave, controlled by The Anti-Monitor (also LaMonica Garrett) destroying Infinite Earths, in doing this we see footage of characters on Earth 1 (Arrow, The Flash, Legends of Tomorrow), Earth 9 (Titans), Earth 38 (Supergirl), Earth X (Freedom Fighters: The Ray), Earth 89 (Batman [1989]) and at the end of the introduction, Dick Grayson on Earth 66 (Batman TV Series). Something I wrote an entire blog post about.