At first I thought I’d do a post of my top 5 favourite moments, but then I realise that’d be difficult and has been done many times before, so I thought I’d take a look at favourite and/or significant moments across 5 different stages and/or types of media so here are 5 Great moments of the 66 Boy Wonder across;
The TV series
Post-TV Series
Comic Book
Animation
Promotional/Advert

Across these two episodes we see many different sides to Dick Grayson. We see him as;
School student – “Richard Grayson” 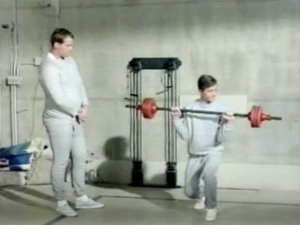 Seeing Dick Grayson brilliantly square in his scenes as a student and his amazingly phony attempt at being a cigarette smoking, leather jacket wearing rebel as he goes undercover are honestly some of my favourite scenes of the entire series.

Supergirl Season 5 Episode 9: Crisis on Infinite Earths Part One
I’ve already looked at this moment in detail here. So suffice to say, it was amazing seeing Dick Grayson in the role again, in live action no less, in the year 2019! The Crisis on Infinite Earths crossover paying homage to so many different DC comics TV and film properties over the years would’ve felt somewhat lacking without a nod to the Batman TV series.

Comic
Batman 66 Meets Wonder Woman 77 Issues 5 and 6
Though it’s not Burt Ward portraying him here, the comic gets the essence down. Issues 5 and 6 Set in 1977, but released in 2017, so either way it took some time, but Robin finally graduated to become Nightwing! Some things never change though, Nightwing nearly lets a holy slip

We see Robin’s attempt at chivalry: 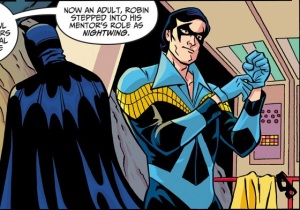 Batman vs Two Face
In 2017 we got the final appearance of Adam West as Batman in the brilliant Batman vs Two-Face animated feature. Whilst the previous year’s Batman: Return of the Caped Crusaders was excellent too, this one gave us more different layers to the Boy Wonder.

Bruce’s friendship with Harvey Dent allows us to see a bit of the green-eyed monster in Dick Grayson! At one point we see Robin turned half evil like Two-Face and once Robin is cured he could not be more appalled with himself! It’s kind of sweet in a strange sort of way! Near the end of the film we see a cure to everyone having been turned into “Two-Faces” administered by what is essentially bombs and ammunition, and we see the Boy Wonder get a little too trigger happy only to be calmed by Batman. This film reminds us that though Robin may be a young adult he’s still a BOY wonder.

Advert/Promotional
1973 Equal Pay PSA
Burt Ward’s Robin appears in this PSA along with Yvonne Craig reprising her role as Batgirl but with Dick Gautier in Adam West’s place as Batman. Wholly (Holy?) ridiculous but this short PSA has good intentions in Batgirl’s demands for equal pay as she and Robin do equal work, and should get equal pay, yet she’s paid less than Robin. Robin’s bewilderment is great here, “Holy discontent”. 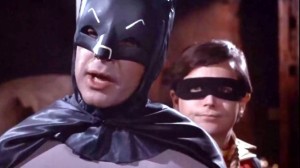 Honestly, I didn’t know Robin and Batgirl were paid for their efforts, and I didn’t know Batman was the employer! Fully deputised agents of the law, but I always assumed they were working on a volunteer basis? Maybe I’m thinking it through too much!