So here’s a look at everything OTHER than Batman, Batman: The Movie and the Batgirl Network Presentation, on this, my Batman 66 blog:

The Loner (1965-1966)
This Western TV show started before Batman and ran for 26 episodes between 1965-1966 with it’s last 9 episodes running during the first season of Batman. The series was created by creator of The Twilight Zone, Rod Serling, and though not an anthology series has a similar feel to The Twilight Zone in its presentation. The Loner starred Lloyd Bridges as William Colton a former Union Soldier who after a Civil War seeks to rediscover who he is and helps people along the way. The Series is available on DVD.

The Tammy Grimes Show (1966)
Only 4 episodes of this whacky comedy actually aired, and they did so during Batman’s 2nd Season.

The series starred, Tammy Grimes as Tammy Ward and Dick Sargent as her brother Terry Ward. The show revolves around a rich heiress, Tammy, who wants nothing more than to spend money. Her Uncle, brother and her housekeeper providing conflict in the series. These 4 episodes are not available on DVD.

Episodes featured;
Episode 9: The Ray is for Killing
Episode 13: The Secret of the Sally Bell
Episode 21: Bad Bet on a 459-Silent
Episode 22: Trouble for Prince Charming

Unfortunately the Green Hornet series is not available on DVD, but the two compilation films are. Similar in a fashion to how the Batman Movie has been available on home media for decades, yet it took until 2014 to get the TV series on Blu-Ray and DVD. With recent reports of the production company Amasia Entertinment having bought the film rights to the character, let’s hope this prompts a home media release of the TV series!

The Big Bounce (1969)
This film is an adaptation of the Elmore Leonard novel of the same name. The novel was fully written and presented for adaptation back in 1966 but was not taken by anyone until this Greenway Production in 1969. This film and the 2004 remake (not a Greenway Production) were both critical and financial failures. The film stars Ryan O’Neal as Jack Ryan and Leigh Taylor-Young as Nancy Barker. Interestingly Ryan and Leigh were both married in real life at the time.

“A Vietnam veteran and ex-con is persuaded by a shady woman to rob a $50,000 payroll account on a California produce farm. But who is playing who?” — is how the film is summed up on IMDB and honestly I couldn’t say it any better!
This film is available on DVD.

Dick Tracy (1967)
The Dick Tracy pilot produced in 1967, also presumably during the period of Batman Season 2. To my knowledge this has never aired. The pilot stars Ray MacDonnell as Dick Tracy. As this was intended as a pilot to an ongoing series, interestingly various cast members are credited despite not appearing in the pilot, as they were intending as regulars in upcoming episodes that never happened! The villain of this pilot is Mr. Memory played by Victor Buono. The actor behind King Tut on Batman.
This pilot episode is not available on DVD. 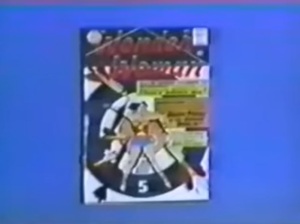 Wonder Woman: Who’s Afraid of Diana Prince? (1967)
A 4 minute Network Presentation for Wonder Woman, also produced in 1967. If Green Hornet was too serious, this is the other end of the spectrum, over the top, ridiculous. Where Batman was ridiculous but played it straight, this knows it’s ridiculous! Batman and Green Hornet, and a Wonder Woman series? Greenway Productions could’ve had a universe of heroes to rival that of all the CW superhero shows we see today!

Side Note:
Every Greenway Production featured at least one actor who had appeared, or would go on to appear in the Batman TV series. Including but not limited to;

Many of the things stated as Not Available on DVD can be found on YouTube.

Unrealised Greenway Productions;
Thanks to https://library.syr.edu/digital/guides/g/greenway_prod.htm we know that at least 12 other episodes of Tammy Grimes were in the scripting stages.

Perhaps more interesting is that there was a screenplay for a film adaptation of a novel by the name of The Well of Loneliness by Radclyffe Hall. As the film never came to pass there’s nothing really to say about it here. The novel, released in 1928 is a lesbian novel which has caused much outrage and analysis since its release.