This blog post is taking a look at things in the Batman 66 continuity that are either plot-holes or contradictions.

I will attempt to explain away these contradictions. Some instances will be longer and shorter than others. I will try not to simply write my own version of the story, I do not intend to turn this into pure fan-fiction. 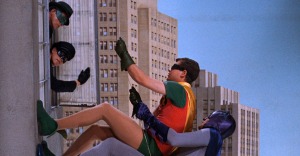 This is at odds with the Green Hornet and Kato’s later Batman appearance where everyone including Batman and Robin believe them to be villains. [Season 2 Episode 51: A Piece of the Action & Season 2 Episode 52: Batman’s Satisfaction]

Between these two appearances Bruce and Dick sit down to watch the Green Hornet on TV. [Season 2 Episode 21: The Impractical Joker].

To put these in a way that would make sense one after another, it is my theory that none of the window cameos actually happened narratively speaking. This would also explain away the inconsistency of Colonel Klink appearing in the 1960s instead of the 1940s.

Window cameos are never set up prior to Batman and Robins ascent up a building, and never have an impact of the story after they’ve appeared, allowing the window cameos to be a sort of “What If” situation. This allows for Batman and Robin’s 2nd interaction with Green Hornet and Kato to narratively make sense.

These are the only explanations I can come up with that would allow that to work narratively.

As it shows here, Dick Grayson took on the role of Nightwing as a way of step into his mentor’s shoes.

Batman essentially comes out of retirement near the end of this story, which would allow for Batman to be active again in 1979. It could be argued that as Dick became Nightwing to take on his mentor’s role, with his mentor back at the helm it is simply a mark of respect and him acknoweldging Batman’s seniority, in deciding to put the Robin costume back on again. 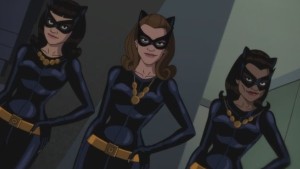 Originally the movie had been intended to happen before the TV series, if the movie were placed first then Catwoman’s identity would be a shock. Narratively, nothing stops the movie being set before the TV series, as during all the villains’ first appearances in the series they are each known to the police and the caped crusaders through supposedly unseen escapades, the reverse is true too as the villains lament having been defeated by the caped crusaders before in discussion in the film.

Three different Catwomen isn’t the issue here, it’s the fact that none are treated as being different women, and are all treated as simply “Catwoman”

One possibility is that they are of a society in which all of their members are known as simply Catwoman. This could work as an explanation for the TV series. However in Batman 66 Meets Wonder Woman 77, all 3 different Catwomen are showcased and each are able to recall the memories of the other two versions.

In Batman 66 Meets Wonder Woman 77 we see Ra’s Al Ghul and the Lazarus Pits he uses to restore his youth. This is relevant as it is established in the TV series Arrow (and possibly other continuities but I can attest to this), that one can be rejuvenated by the Lazarus Pit, but that if brought back from death, one is not quite themselves and that their souls need to be retrieved to their bodies. Taking this one step further, perhaps each of these Catwomen have used the Lazarus pit in assisting their 9 lives, and that they are not quite themselves and are restored with a different appearance.

Perhaps even grimmer, especially for something with the tone of Batman 66, perhaps Catwoman’s soul is retrieved but into different host bodies, perhaps on a rotational basis, allowing for the mixed timeline of each of the three Catwomen’s appearances across TV, Film and comics. This would also explain why, after Season 3 utilised Eartha Kitt for their portrayal of Catwoman, that we see Julie Newmar’s body double portraying Catwoman in the penultimate episode of the series. 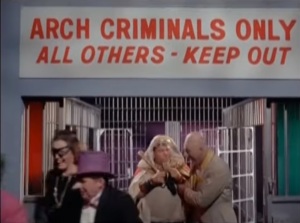 All of this goes someway to explaining why they are the same woman but not everyone’s perception that they are the same woman. Both are a stretch but my two theories are either
a) A perception filter is put in place by the psychic abilities of the Martian Manhunter. The Martian Manhunter appears in 2966 in Batman 66 Meets the Legion of Superheroes, but it is known that he has a lengthy life span, and even if he weren’t, his appearance proves his race to have existed and time travel is used in this story anyway.
b) Still wholly ridiculous but somewhat easier to implement from a story point of view is my 2nd option. In Legends of the Superheroes, Solomon Grundy is able to pass as a normal looking person by the use of a hat which alters people’s perceptions. All 3 Catwomen essentially wear the same costume and so perhaps this costume has the same properties as that hat! This would allow for their to be “no difference” to those looking at the Catwomen, and also would not require the Martian Manhunter to have to alter 100s, 1000s, maybe even millions’ of peoples’ perceptions!

Two different Riddlers
Riddler I: Frank Gorshin
Riddler II: John Astin
Bit easier to explain away, as this one sort of gets explained in Batman 66 Issue 27 . We see the Riddler wearing a mask resembling John Astin’s face. As there is no explanation for the mask here, I see no reason why The Riddler would be wearing a mask all throughout his appearance in (Season 2 Episode 45: Batman’s Anniversary & Season 2 Episode 46: A Riddling Controversy), but it would explain why he simply reverted to looking like Frank Gorshin again further down the line (Season 3 Episode 2: Ring Around the Riddler). Perhaps the Riddler was a big fan of The Addams Family? 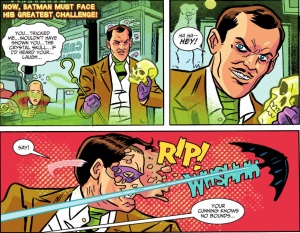 This one is a bit of a weird one, but as the condition that affects Mr. Freeze has always been a fictional one, I feel there’s a little artistic license here. Mr. Freeze I needs to retain extremely cool temperatures but is able to retain his skin colour. The 2nd and 3rd Mr Freeze’s however have a frosted almost ghostly appearance to their skin colour. In the 1997 film Batman and Robin, we see Arnold Schwarzenegger’s Mr. Freeze, and we see how he came to have his condition and we see him with blue skin, we do not however see the time between. It could be argued that after enough time Mr. Freeze’s condition would affect the skin causing it to change colour and appearance, and perhaps cause the loss of hair due to the initial shock on the system (Mr. Freeze II), and then the hair coming back in time (Mr. Freeze III).

I am sure there are many more contradictions to be found, but these 5 stood out to me for now. If I come across more and am able to explain them away I shall come back with a Volume II of this post!