This blog post is an in-depth look at that appearance, broken down into the following sections;

The crossover event for the TV Shows; Supergirl, Batwoman, The Flash, Arrow and Legends of Tomorrow for the tail end of 2019 and being of 2020 was Crisis on Infinite Earths. In the original 12 Issue comic book series (and its tie ins), Crisis on Infinite Earths features various different Earths, representing various comic book iterations and continuities established over the years. This TV version is very similar, using previously established earths, and continuities from within these TV shows, but also from other TV shows and movies from across DC’s history on screen.

As has been established in episodes leading up to this event a wave of Anti-Matter is sweeping across the multiverse destroying various earths and universes. During the introduction for part one of this TV crossover; Supergirl: Season 5 Episode 9: Crisis on Infinite Earths Part 1, we first see Earth 89 with Alexander Knox (representing Tim Burton’s Batman film from 1989), Earth 9 with Hawk and Robin II (representing the Titans), Earth X (representing Freedom Fighters: The Ray) and then…

Earth Numbers scroll until landing on Earth 66. Underneath that the location is displayed as Gotham City. We hear the tail end of the opening narration for the episode from the character Mar Novu/The Monitor stating “…but the time for preparation has passed, the crisis, is now upon us all”

Whilst this is happening we see Burt Ward’s Dick Grayson walking a dog toward camera. Once The Monitor has stated the word “passed” the sky turns red, Dick slowly turns around, sees the red sky and then as The Monitor’s narration ends, exclaims, “Holy Crimson Skies of Death”

Breakdown of what we saw and the references within

Earth 66 alludes to the year that the Batman TV show began, 1966

In this segment, Dick Grayson is wearing dark trousers, a white T-shirt with a high collar and a V neck sweater, which is mainly red but that has green and yellow trim on the sleeves and black, yellow and green trim on the V of the V neck. His clothing here is almost exactly the same as the clothing worn by Burt Ward in the comic “Burt Ward: Boy Wonder”, which was released for Free Comic Book Day back in Saturday 5th May 2012.

At the end of the introduction before the title card for Crisis on Infinite Earths shows, Dick says “Holy Crimson Skies of Death”, this is reminiscent of all the times Robin would say “Holy” and then add something appropriate to the situation no matter how on the nose or ridiculous it sounded.

Dick is walking a dog in this appearance. Burt and his wife Tracy run Gentle Giants Rescue and Adoptions and Gentle Giants Dog Food. Whilst this would be enough of a reason to have Burt walking a dog in this segment, it has come to my attention that the dog is a German Shepherd, which is an appropriate breed to be the comic character Ace, the Bat-Hound from the comics. Also this dog has a mark on his head, much like Ace did early on in his appearances, which was the reason that Ace required a Bat-mask too. So, though the segment lasts only 12 seconds, it has seemingly gifted us another character for the world of the Batman TV series.

Since I started writing this post, in an installment of the Batcave Podcast from John S. Drew of the Batcave Podcast and Dan Greenfield of the 13th Dimension, featuring Burt Ward, it is revealed that, although not named on screen, Burt was told that the dog he is walking in his cameo is Ace, The Bat Hound. In this podcast it is also revealed that Burt himself suggested he wear his sweater from Burt Ward: Boy Wonder.

Aesthetically the cars and the extras in the scene are reminiscent of the 1960s.

With all the clues, references and hints listed above it was fairly obvious whom Burt was portraying, but the name is never stated during the episode. During the in memoriam section of the aftershow, however, we get a credit for Dick Grayson (Earth 66).

This seemingly confirms the death of Dick Grayson.

At the end of The Flash Season 6 Episode 9: Crisis on Infinite Earths Part 3, all known universes and earths are have been wiped out by the anti-matter wave.

In a special episode of Legends of Tomorrow: Crisis on Infinite Earths Part 5, the multiverse is reconstituted, showing new and old universes in this new multiverse. We do not see Earth 66 again in the crossover but various Earths pre-Crisis were shown to have survived the reconstitution so it is possible but not yet confirmed that Earth 66 was reinstated.

Further proof, if proof were needed that Burt Ward was reprising his character from the classic TV show!

Contradictions and Ret-Cons…or are they? 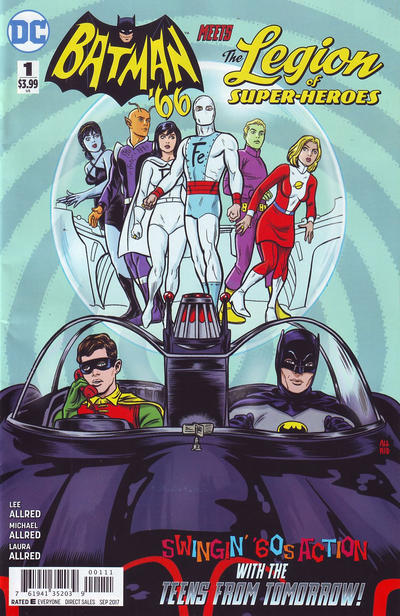 In a previous blog post  I stated that I’d be intrigued to see what appearances from the characters since the end of the show would or wouldn’t be considered canon.

On that front I see only two possible appearances that could now be contradicted or ret-conned.

In the comic book one-shot Batman 66 Meets Legion of Superheroes, heroes travel to and from the year 2966. Given that the segment discussed in this blog post aired and seemingly happened on Sunday 8th December 2019, and that Earth 66 was destroyed in 2019, that it stands to reason that there wouldn’t be a 2966 to travel to. However, as with all time travel in fiction it is only ever a possible future, and the other part of the one-shot happened in 1966, so events transpired since 1966 for the future to have changed. This of course assumes that Earth 66 didn’t return, if it did, then there is no issue!

In Crisis on Infinite Earths Giant 1, the first of two comics released to tie in to the 5 part TV crossover event Crisis on Infinite Earths, Earth 76 is established to be the setting for the Wonder Woman TV series. With Batman and Wonder Woman’s TV shows taking place on separate earths but being shown as being on the same earth in the mini series can however be explained as the Wonder Woman here simply being the Earth 66 version of Wonder Woman. In the comics and the TV versions of the multiverse often characters will have similarities to their counterparts on different earths, and so it stands to reason that Earth 76 and Earth 66’s Wonder Woman would be similar. Crisis on Infinite Earths Part 5 in reconstituting the multiverse merged 3 previously separate Earths (Earth 1, Earth 38, and an Unnamed Earth) together to form what is now known as Earth Prime. So it stands to reason that these changes could’ve happened across other continuities too. So could it be that Earth 66 and Earth 76 in this new multiverse now have a shared history? If so, then the Batman 66 Meets Wonder Woman 77 mini series could still have happened the way that it did.

For the collectors out there, looking to own this extra footage of the world of the Batman TV series I will take a look at what we can expect, keeping in mind none of the following home media releases have been announced yet at this point in time (24/1/2020)

Based on previous crossovers between Supergirl, Batwoman, The Flash, Arrow and Legends of Tomorrow the following stands to reason

The Earth 66 footage is almost certain to appear on Supergirl: Season 5, on both Blu-Ray and DVD, given that the footage aired as part of the Supergirl portion of this crossover

The Earth 66 footage is very likely to appear on Batwoman: Season 1 on both Blu-Ray and DVD,

The Earth 66 footage is also likely to appear on an individual release for this crossover. This is because the past 3 crossover events between these TV shows have all had individual DVD releases in the UK, and the most recent one before Crisis on Infinite Earths, “Elseworlds” also had a Japanese Blu-Ray Release.

So to sum it up, if you want 12 more seconds of the Batman TV series on Home Media at some point in 2020;