In honour of what would’ve been Adam West’s 89th Birthday, and in honour of Adam West Day in Walla Walla, Washington, I thought I’d take a look back at the day I met Adam West.

It’s 2005, I’m 17, going to autograph events quite regularly. The guests start to get announced for Collectormania 8 in Milton Keynes. Lo and behold there’s going to be a Batman reunion. Frank Gorshin, Julie Newmar and Adam West. Excellent, I’m going to get to meet The Riddler, Catwoman and Batman himself! 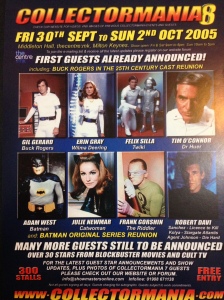 By the time the event comes round (Friday 30th September 2005-Sunday 2nd October 2005), unfortunately, Frank Gorshin has passed away and Julie Newmar has had to pull out for personal reasons.

Still, Adam West is going to be there, and there are other guests I am there to see too.

With an event like this, for those who may not be aware, some guests only sign certain days. Well I had the weekend free from college and the guests I wanted to get the autographs of were a mixture of people that were only there for Saturday, only there for Sunday, or there both days.

Now, I very rarely go for two autographs from the same person, though I understand some people like to have various things signed, often I’m of the thought, if I’ve got the autograph I’ve got it.

This, however, was Adam West!

I queued up both days, for different photos, from the same guy.

Day 1 (Saturday). I queued up, got the autograph, he thanked me for coming and I was on my way with an autograph from THE Batman!

Amazing, cool enough, would’ve been absolutely fine with that.

Day 2 (Sunday). I queue up again and get the photo signed of him carrying the bomb. 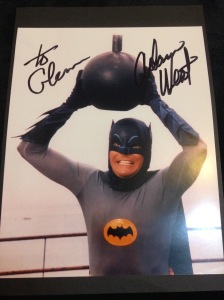 He looks at the photo, and says easily one of the most recognisable quotes from Batman 66 to me. “Some days you just can’t get rid of a bomb”. Another amazing moment, I’ve gotten to hear THE Batman say THAT line to me live and in person. Then the person who’s there with him says to me, “you were here yesterday, weren’t you?”. This then prompts Adam to have a short conversation with me about who I am here to see and I happen to mention William Shatner, (12 years before they would be arch-rivals in Batman vs Two-Face!), and he asks me how much Shatner is charging. I tell him some amount (I have since forgotten!), predictably a larger amount then everyone else is charging, including Adam himself, and Adam looks at the person he is with and says “These people pay good money”. He again thanks me for coming, and I’m on my way with yet another autograph from Batman!

So that was my experience meeting the one true Batman. Perfectly friendly and interactive with this obsessive fan, my fondest memory of any autograph event, not only because he’s Batman, but because of how he interacted with me too. Though for the most part the guests I have met at events like Collectormania tend to be cordial and even friendly, it is hard to beat chatting with Batman and hearing that amazing line straight from the source.

2 thoughts on “The Day I Met Batman”